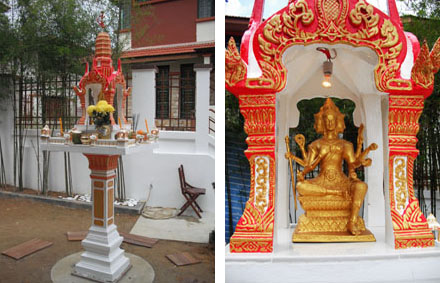 2009年12月下旬，我们来到柔佛州 Idaman 花园帮江先生安置四面佛。
4-Face Buddha，also known as Brahma、Than Tao MahaProm or more commonly refer as “Phra Phrom”； is one of the popular god worship by many people in Southeast Asia. Originated from one of the Indian Buddhist deities, became very popular in Thailand, a country refers as “The Land of Buddha”. In Thailand, most altars, deities or god worship by the locals are referred to as some form of Buddha. As such, when any of these Buddha is found in other regions outside Thailand, they are also referred to as the same Buddha as originated from Thailand.
The following pictures are various stages of building the 4-Face Buddha at the new apartment of Mr. Kang at Nusa Idaman in Johor Malaysia… 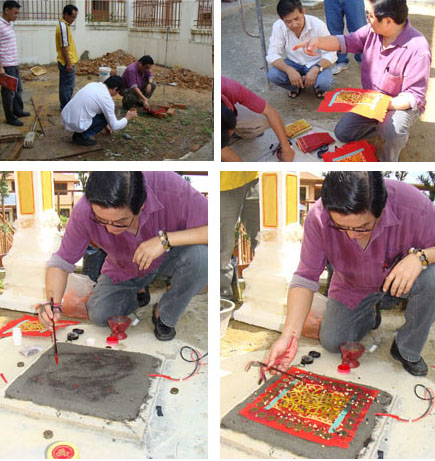 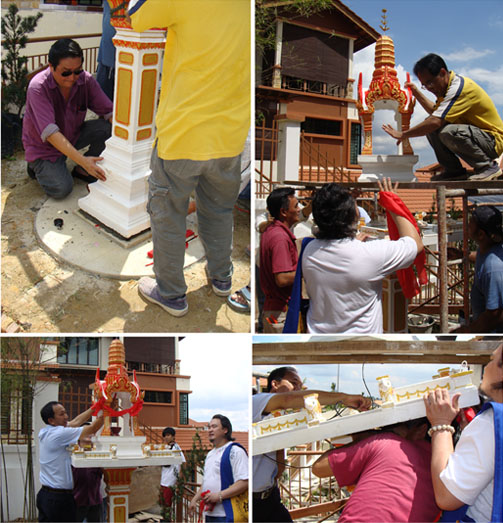 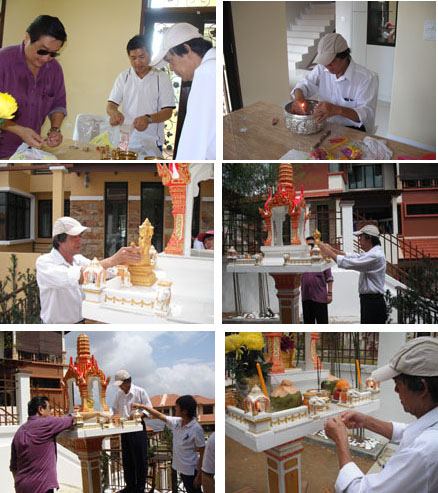 Setting the Buddha
Four-Face Buddha is generally located at the outer front section of the house near the front garden. As the house engaged Prof.CPLim for Feng Shui consultation is facing 10 degrees off the South direction, hence, the front of the Buddha is best set facing the exact 0-degree North and the back is at 180 degrees facing the Southern direction. The point for the temple to stand is already on a higher ground level, as such, the height of this stand is set at 49 inches from the existing ground level. This is to ensure that the face of the buddha is not lower than a person standing in front of him. The base for the stand is made with added firm chemical concrete to ensure total stability.

The Auspicious setting
An auspicious day and time with blue sky and bright sunlight were selected to achieve maximum blessing. The base of the temple was blessed with 32 Yong-Zheng 雍正 coins to symbolize wealth from 4 directions. The 32 coins in Fengshui represent 24 mountains and 8-BaGua points. 5-element beans comprise green, red, yellow, white and black beans for auspicious harvest and a special blessing talisman were placed on the base.

The Auspicious sign of blessing
Orchid flowers, water and coconuts are generally offered to the 4-Face Buddha during praying. Approx 45 minutes after the completion of setting the base, a mystical sign of acceptance for this setting was seen at the 4 coconuts offered to the Buddha. 2 of the coconuts with their straws facing the Buddha appeared being drank from them. This can be seen from the picture above where the coconut shell on the left side was wet with coconut water , a drop of coconut water can also be seen on the straw flowing downward. As this was not set intentionally prior to the praying, 2 other straws were advised to turn towards the Buddha as well for blessing.