My first views on LMDE (Linux Mint Debian Edition) 201204. Linux mint X has always been built on ubuntu series. LMDE is linux mints “vanilla” version built on debian. (sly use of vanilla). This essentially takes out ubuntu as the middle(ware) and removes a substantial amount of bloat.

There are 2 versions of LMDE: XFCE and Mint’s own Gnome…called Cinnamon. 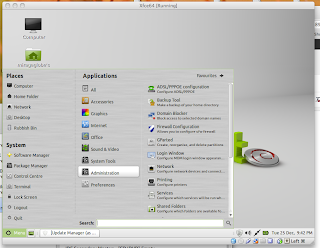 When you first install. You will need to select /dev/sda2 as Ext4 and “/” which defines it as root partition. /dev/sda1 is a default linux-swap. LMDE does this quite nicely automatically if you allow it to format your disk and setup partitions. All well for my installation. The installation seems very fluid and I didnt find any problems as the step by step was quite intuitive.
Comments welcome on any installation hiccups.
Day 1 Update

I reverted back to XFCE Mint 13 LTS (Long term support). As I was using mint for a media centre, its just too much effort to keep setting the pulse audio settings (which does not save!). I am still sticking with the Ubuntu middleware version for now. LMDE is quite decent but theres a few gritty issues. It shows great potential to be a top desktop replacement.